Thank you Hugh Tulurialik for taking some time to speak with us and allowing us to share your thoughts on our Co-op social media page. 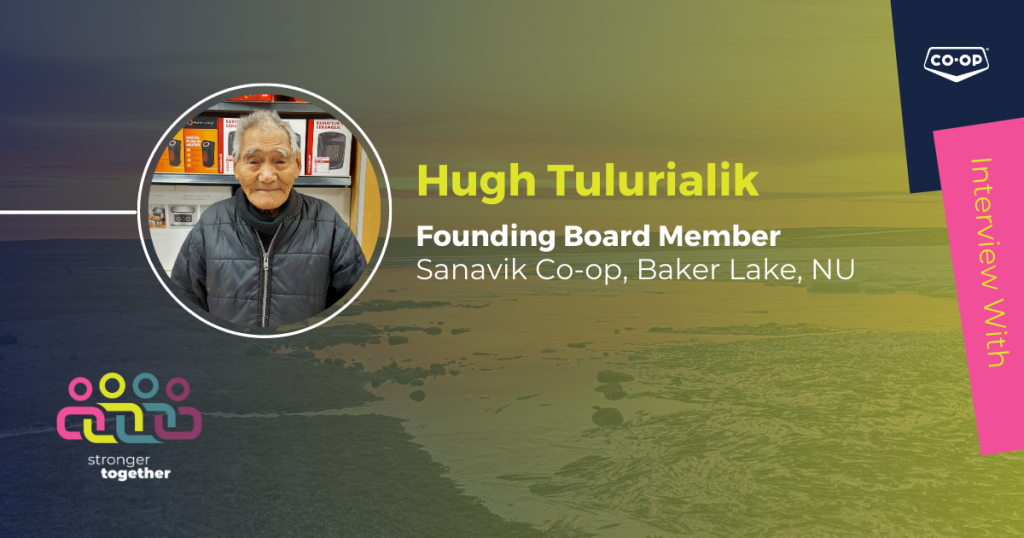 Can you tell me a little about your life before settling in to the community?
Prior to coming to the community, I lost my mother at the age of two and it was me and my dad. My grandmother raised me in the nomadic way of life. While I was growing up, the communities did not have stores and with little milk to access, I was brought up on a type of fish (miso) soup and water.

Can you tell me about your history and how you came to settle in Baker Lake?
Initially, I was living off the land. When my grandmother was unable to walk, we settled during the spring time where the caribou were in the area for us to hunt. Around 1952-1954 I settled in the community of Qamani’tuaq, Baker Lake’s Inuktitut name.

Have you held different roles on the board?
I have been a Vice-Chair for a time but always a Board Member.

Is it important to have your family involved with the Co-operative, especially since your personal involvement with the Co-op started at inception, before the Co-op started offering grocery services?
Yes, it is important to me. My son is able to be on the board. He speaks English and understands the English and business terms. I can learn from my son the areas I need to understand on the business side of things and it is helpful. It lifts me up personally because I know that the involvement is being passed on to the next generation.

Sanavik Co-operative thanks Hugh Tulurialik for his service on the board and encourages his continued involvement as it speaks volumes being involved for that length of time dating back to the inception of the co-operative movement in Baker Lake.

Thank you for that. In the community, we went through a very hard time in the co-operative movement and we keep bringing up things that we require support in. It was not easy to get past the hurdles as a co-operative in the community. Right now, I am very happy with where we are and knowing that we did not give up because we were able to pass the time where we were having a lot of challenges. We are moving in a better state now and that’s really helpful knowing where we are today.

How did co-operative movement start?
When we initially started the co-operative movement in the community, we had huge support from Jack Butler. Jack provided support to start the co-operative in the community. Initially the Co-op was developed as an arts and crafts co-operative in Baker Lake. He was an entrepreneur and provided a lot encouragement. As an example, my wife is a print maker and when we would sell the prints to Jack, he was so pleased and in awe of what she was able to do. Being able to sell prints to the Co-op was a very meaningful things to do as a print maker. Jack’s encouragement and development of the community was huge for us.

It sounds like Jack was integral in moving the co-operative movement forward for Baker Lake.
Yes.

What is the best thing to you about settling/living in Baker Lake?
It means a lot to me. The community itself, it belongs to the people in the community. It is very meaningful to live in Qamani’tuaq.

We know that you sing. How long have you been singing?
I started back when there was no television at the time so I listened to the music on the radio. My biggest inspiration was Johnny Cash and Hank Williams. Listening to the music, I couldn’t understand the lyrics but I was able to pick up the tunes. As I listened, I would use a dictionary to understand what they were saying and then eventually I started to use the lyrics and translate it into my music and into Inuktitut.

How did you discover your love of music?
One of the things that is important to me along with the lyrics, singing, the music, playing guitar is even though I am not able to understand the lyrics that are being sung, when the music is being sung in English terms I am still able to make some sense of it. It is almost as if you are one person. Even though we are a very diverse country or world, song intertwines different cultures. It makes you look at the human race as one. I am very passionate about it because it is something that touches an individual with what they are singing about.

Any other information or thoughts you want to share with us.
I would like to acknowledge John Simms. As part of the board, there were a lot of things that we needed to consider and we were not doing well at all. John was able to assist us and help us focus on various key things to get us where we are today. As a board member, I’ll never forget John Simms because he gave us a lot of guidance on what our next steps should be.